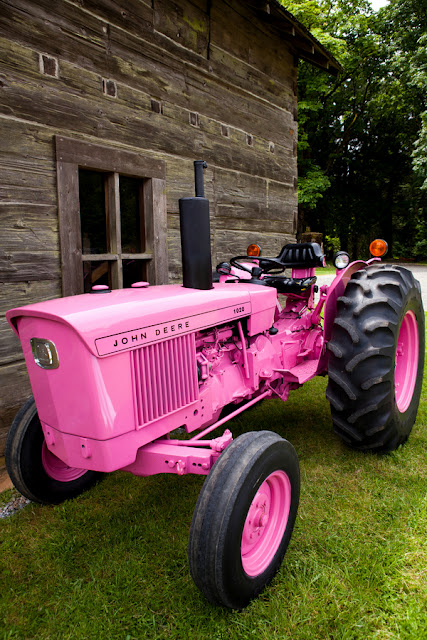 Many women have wish lists – some include diamonds, others dream vacations – mine has a new first to top the list. I want my own tractor! Not one of those powerhorses that would get stolen away by the men in my family, but one with a bucket on front to clean the barn and rotate the compost pile, and one I can use to mow the fields at the farm. I guess I am starting with the end of my story. Let me rewind…

Yesterday we decided to divide and conquer. Our farm list was getting rather long from the neglect of soccer season. Corey and Brady headed off to the farmers market as Jordan and I headed out to the farm. We had gotten the breeding ewes in the night before so we could get an early start. First on our list was to go through the ewes. With the coyote attack last week, I wanted assurance that none of the other girls were missing. It might be easy to spot a missing sheep in a flock of ten, but easily recognizing a flock of 73 when it should be 74, not so much. As we caught each ewe, we did a quick health check, looking for any abscesses that might have been caused from the occasional snake bite or broken tooth (all were good!). We also checked the color of their eye lids to determine if any were anemic, a sure sign they need to be dewormed. After the girls were all cleared, they were given free access back to their pasture. Next we went through the lambs. A few were allowed to leave alongside their mothers, most needed to be weaned (this is our second group of weanlings). So now the barn is full of very loud and disgruntled lambs. After a couple of weeks we will move them to their own pasture for the summer.

Ewes and lambs taken care of, we moved onto other pressing projects. Armed with reinforcements (our oldest son, Brett, was now on the scene) we decided to tackle the fence around Nanny’s yard and mow pasture.  Needing brute strength, I left Brett and Jordan in charge of repairing the fence. This had become priority one, given the less than pleasant visit we had from Dad accusing the lambs of eating Nanny’s flowers. Not our cute little babies, I cried! But I was too late, they were past the joking stage. And a mad grandmother is never a good thing.

With the fencing (or lack of fencing) fiasco being addressed, I headed off to mow. Ah, we are back to the tractor. First Brett had to give me a quick tutorial on Big Red, our oldest and never before tamed by me tractor. With all the other tractors currently being used in the hay field, Big Red was all that was left. I climbed up the three foot steps to take a seat. What? No comfy, cushy driver’s seat? In its place was a make shift plywood seat, no, seat seems too kind, it was more like a stool on a spring! Never deterred from a little “me” time, I took the throne and off to the pasture I went. I was making great headway when suddenly I hit something. With all the rock breaks on the farm, I couldn’t have been more careful and watchful. I couldn’t imagine what I hit. I turned off the PTO (power take off that runs the mower) and pulled up to see the cause of my frustration… a rock, a little, barely protruding rock. Oh, the story doesn’t end there. When I tried to re-engage the PTO, the mower motor began to smoke.  Shoot! Back to the barn I went. Brett took a quick look under the mower deck and whistled. Whistling was not the sign I was looking for. Thumbs up, all good, anything would have been more welcomed. But instead my mower blade now looked more like the blade on a hand sickle.

It may have begun as a small suggestive voice while bouncing my bum on that plywood seat, but in that instant I became certain. Now on the tippy top of my wish list is my very own tractor! And I think a pretty pink one might just keep it out of the hay field.