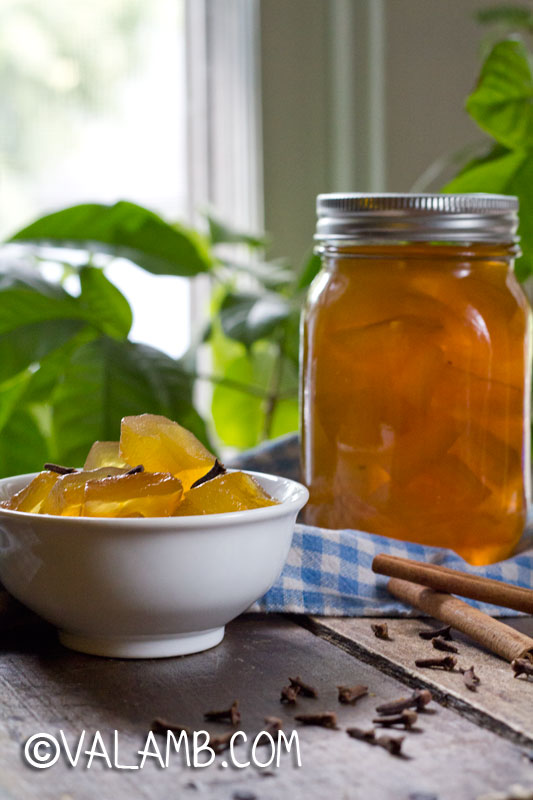 I don’t remember my Grandmother Hazel canning, but most of what I remember was after her five sons had moved out and she was living alone. Corey’s great-grandmother however, canned everything! As she had either forgotten that all her children had left the nest or found it hopeless to convince PawPaw White not to plant their larger garden.

This is another one of Corey’s grandmothers, Nanny Bea. She was the cafeteria manager at the local high school for over thirty years. And in her day, every bit of food that came out of the school cafeteria was homemade with the freshest ingredients from hot cross buns to green beans seasoned with pork to cinnamon scented baked apples. And she lived her preference for real food at home with a garden the size of our entire backyard. Then again, she lived in a time when all food was real food.

This is Nanny Bea’s recipe for Watermelon Rind Pickles, an absolute I-will-not-share favorite of Corey’s.

Slice watermelon into one inch sections and remove all of the pink fruit. Using a potato peeler remove the green peel from rind so that you are left with only the white section of the rind. Cut rind into one inch squares.

Add to a large pan and cover with water. Add salt and bring to a boil. Simmer until rind is tender.

In another large pan, add vinegar and sugar. Bring to a boil. Once boiling add cinnamon sticks, cloves tied in cheesecloth, and the drained watermelon. Simmer at a low boil until rind is clear and transparent.

Note: Depending on the size of the watermelon you may need more or less of the vinegar/sugar mixture.  This is fine. Just be sure to keep to a 2:1 ratio of two parts sugar to one part vinegar.

These pickles do not need to be processed in a water bath. Using hot jars and boiling hot syrup is sufficient to cause the jars to seal. After jars cool, test seals by pressing the center of each lid. If lid does not pop up and down it is sealed. If any lids do not seal properly within 24 hours, refrigerate and eat promptly.

One Response to “Watermelon Rind Pickles”